Might as well, the bios for my MSI motherboard is buggy. They removed support for the NVIDIA card I sold. At least, if you have two video cards, an AMD and the NVIDIA card. They don’t want you mixing brands. The update says PCI compatibility, by that they mean no NVIDIA on MSI’s AMD motherboards.

My CPU should work in a X470 board. Those are the new boards, for the new AMD CPUs. Buy a different brand. Then Windows won’t be activated. I’ll keep waiting for a miracle bios update. As the board itself is fine, other then the CPU socket in a stupid orientation.

Nope, Mythtv is. It came first, and it works great. Not in Windows, but in the OS power users use, Linux.

Plex is actually pretty shitty compared to Mythtv. It has no built in commercial flagger.

I only use Plex to watch stuff, not record.

You can get cheap ass dedicated servers there. Does anybody provide a DDoS protected VPS in Kansas City? Probably not. That’ll kill your ping, Las Vegas to Kansas City.

I tried playing it, almost landed, then the game crashed. The problem with messing with the page file size. I set it to system managed, it requires a reboot though, shut it down instead. It’s also on a different drive, a RAW disk image, instead of the game drive.

Doesn’t work very well at 1440p. Looks like 1080p doesn’t work well either, it crashed. I’ll continue switching the input on my monitor.

No stutter though, just slow motion.

Probably because I upgraded to Oreo on it. That’s the only way to restore my cloud backup. Obviously Android phone makers, don’t know how to do software. If you want working WiFi and Android, you’ll need a Pixel phone. Cheaper to get an iPhone.

Doesn’t work with rechargeable batteries. If you push the batteries down the right way, it’ll turn on for a second or two. And then it won’t turn on again after it turns off.

You’d have to hope the thief, pushes down on the batteries just right.

I took the batteries out and in multiple times, it doesn’t want to turn on.

The head of the screws, is plastic or something, you’ll damage it unscrewing it. I could send it back, but they might not want it back. Buy a different light instead. To lazy to put it in a box and ship it. Also, not 100% free to ship it back, costs toner, drum, and label paper.

There doesn’t appear to be an alternative C battery powered motion activated light. Not that many on Amazon.

Costs more, but uses four batteries, instead of three.

If that’s the problem, you need NiZn batteries. Don’t know if my charger does those.

I’ll just buy the MAXSA light. The stupid light damaged part of the battery, the condom that protects it from the vagina. It’s peeling off on the top, where it needs it most.

Doesn’t say how many volts it requires, I’ll assume it’ll work then. 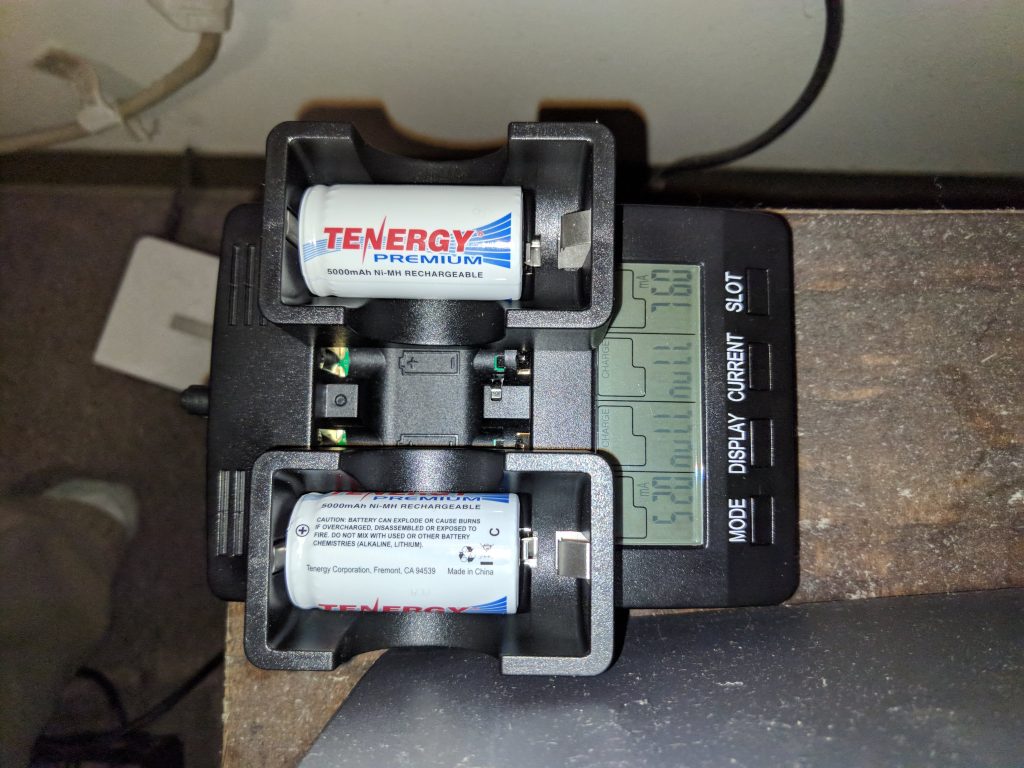 They work, set them to charge at the max, think 1400 mA. It’s not actually charging them that fast though, mostly under 1000. Can’t do a 3000 mA rapid charge, my charger doesn’t charge that fast.

You can buy them on eBay.

Only charged those two batteries to almost 2000 mAh. Probably had a charge. To lazy to do the discharge & charging.

The other two batteries look a little beat up. Or I used the screw driver to remove em, and scratched them.

Or I don’t notice it. Starting the smell my stinky apartment.

They have unconditional love. Might as well have crying too. The antidepressant doesn’t do anything anymore, anxiety, and OCD are both worse. The Zyprexa somewhat helps the depression. If that’s the only medicine they want me to take, then they need to increase it to 200 MG.

No need to email the doctor, I’ll just check myself in the nut house instead, or be forced to go there. They only believe what’s written on their useless survey they give you each appointment.

I’d have to delete all the posts on the other domain, thanks to the censorship law. Who knows which posts are now illegal.

Not that many posts with the word sex on this site. None of the voters read anything about the law they passed, based on the name of it, they passed it.

Use the default page file setting. Otherwise, change the initial and max to whatever is recommended. I put it on the games drive too, didn’t play any games after doing that, Windows likes being rebooted after changing some settings.

The stuttering in ARK with the recommended for initial and max was less. The best option would be to disable it.

I first suspected a HD issue. Might be RAM too. The page file uses the hard drive. I turned the SWAP off in Linux, and commented out the /etc/fstab for it. Don’t really need it, computer doesn’t even seem to use it.

If your replacement phone has an earlier Android version, you don’t get to restore until you update it. Since it’s Android, you have to update several times, before you get the Oreo update.

Oh and you have to reset to get the setup wizard to open again. That means entering your random passwords in again.

You can try using Nova Launcher, but good luck, you’ll have to try opening every setup thing. I’ll just do a factory reset.

Finally got an email yesterday, saying I have access to the beta. I made a call with it, and it sounded just as good as Cricket’s LTE voice calling. Couldn’t hear it ringing though.

Better then FreedomPop and magicApp, probably GrooVe IP too. It is better then GrooVe IP, as you don’t have to forward it to anything, just use your Google Voice number, in the Voice app.

Some weird flicker bug with AMD GPUs, use “amdgpu.dc=0” in your kernel boot options, and it goes away. I get a weird flicker every some seconds. Not a full flicker, kind of like a flash. It’s different for other people, search Google and you’ll see. Somebody in the bug report said to disable that, and now it works.