I removed all the patches from the PKGBUILD, except one Arch Linux patch, that sounds like a good idea. I want an even more stock like kernel, I already have the Fedora config. It’s compiling now.

You can find the PKGBUILD here. That PKGBUILD only applies to 4.18.11+. All the old kernels in that folder, have all the shitty Manjaro patches.

Switching distros is to much work, /home isn’t a separate partition. Restoring a backup is to much work. Also, I like Arch Linux’s packages, customizing any part of Manjaro or Arch is easy, just edit the PKGBUILD and run makepkg. I’d probably like Gentoo too, possibly better.

It’ll work, if nothing is using AUFS. Docker uses AUFS, you can change it to something else though.

It works. Once it’s done uploading, you’ll be able to find it here. Comcast doesn’t believe in faster then 6 Mbps upload.

Aliens created humans. The humans didn’t like being created by other intelligent life, they wanted to be the only intelligent life. So the Aliens made Gods for the people, to keep them from killing each other.

Once you know everything, you can create divine beings.

Religious nut jobs will think this is bat shit crazy, because they don’t like the truth, Aliens exist, get over it.

You wouldn’t exist if Aliens didn’t.

One of my Amazon branded rechargeable batteries only has a capacity of 1513mAh. The other battery is 1926mAh.

It’s charging the other battery now, I assume it charges at 400, and discharges at 200. Hopefully it doesn’t catch on fire. It takes days to discharge/refresh them, if using the default rate.

If I needed more batteries, I’d buy Energizer Rechargeable AA Batteries. They might be the cheapest ones. I mostly have the Panasonic eneloop batteries. Apparently rechargeable batteries last a long time. I’ll keep using the 1513mAh battery, maybe it’ll magically repair itself. RAYOVAC is cheaper, but do they hold a charge for a long time? If they aren’t pre-charged, then no. I had some AAA RAYOVAC rechargeable batteries, they died fairly quickly, wouldn’t take a charge anymore. Cheaper because they are 1350mAh. If you pay more the Amazon ones are most likely rebranded Panasonic eneloop batteries.

What’s the point in high capacity batteries? Just have way to many rechargeable batteries like me, and you can just change em more often. 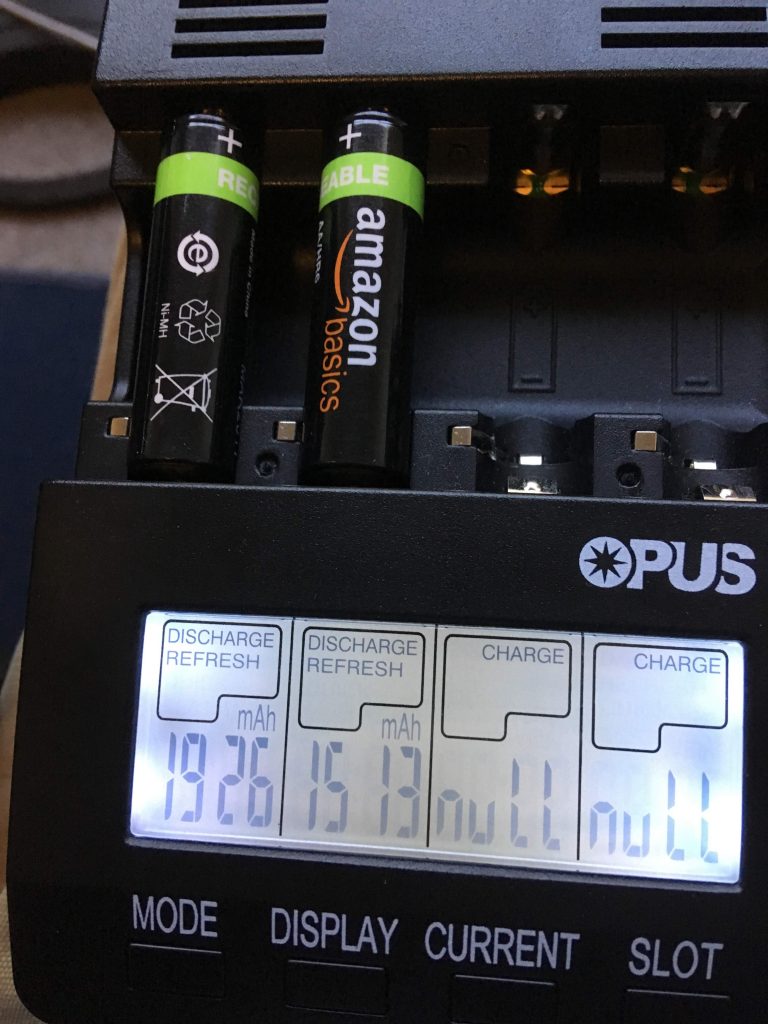 I assume that applies to their BUYSHARED brand as well. If I remember correctly, he said a racist site was or is hosted by him, and a reporter threw a fit. Because he wouldn’t take the site offline.

Cloudflare is a dick, if the CEO gets angry over your site, and it’s using their CDN, you can say goodbye to your CDN and protection.

If you like censorship, Cloudflare is what you want.

I should get the cheapest Slice from them. Not much more then the reseller hosting. CPU usage doesn’t matter, if you use to much, they will cap you. Capping is fine with me.

Might need a new domain registrar, Google might take my domains away. For saying they suck, they do. I need a new email provider too. Domain that is coming up for renewal, I transferred to porkbun.com. It might take five days. The whois protection is free, and it’s cheaper then Google.

Using the open source AMD driver, and a RX 460. Probably not that demanding, Windows has a RX 470. No point in playing it in Windows, works just fine in Linux. Does No Man’s Sky work with the Steam Play thing? It’s based on Wine. You can enable it for all games, not just verified working.

Pretty sure I beat the first game. No idea why it took me so long to buy the second one. I own the first one too, I assume I beat it.

I didn’t know the open source driver could play games. The GPU gets hot, CPU doesn’t break a sweat, unless I’m recording.

No Man’s Sky is better then the other space exploration game I bought a long time ago. Paid to much for that other game. You just click a button to land in No Man’s Sky. No Man’s Sky is great even if you only play by yourself.

I’ve thought it would be nice if a cell provider would offer home internet, then I wouldn’t have to pay Comcast anymore.

What will the latency be like on 5G? Verizon is going to start offering 5G in select places soon or maybe they already did, not here. AT&T is apparently going to offer 5G internet too. Verizon won’t have a data cap, apparently. T-Mobile said they’d offer it too, if the FCC approves the T-Mobile Sprint merger. That might be a ways off though. Verizon is $70 a month if you don’t have cell service from them, otherwise it’s $50 a month. I’d gladly pay $70 if there’s no data cap. And if the speed bursts faster then 60-70 Mbps.

Not signing another contract, once my deal is up. I’ll just overpay till I find out if AT&T is coming here with 5G internet, I think they will be offering it by the end of the year. Comcast doesn’t deserve money, ping was crap in games for a day or so, they did maintenance or something. Could of been a Windows thing. Don’t forget, Comcast will lower your internet speed and charge you more.

If no 5G internet here, I’ll probably go with CenturyLink, no data cap if you get the Internet Basics, you have to qualify to get it. No data cap means I can watch even more TV. I’m not paying for cable, or any other DRM solution. Silicon Dust’s Premium TV doesn’t have DRM, watch and record using whatever you want. You need one of their devices, I’ve had one for some time. Thanks to firmware updates, I didn’t have to buy a new one. I tested the demo in VLC before paying. You can watch any of the channels for two minutes or something.

Go here for the facts, somebody backed their NAND up without it, then with it. It creates files for the NAND, it doesn’t resize the NAND, and then dual boot.

People are still posting their false bullshit on various threads on GBAtemp.

Somebody said it was a hack job. I’ll keep using SX OS, I can play games that require newer firmware now, thanks to the “fake” EmuNAND. The original firmware is still and older version, I never did boot into the original firmware to see if it still works. The EmuNAND works.

I leave the Switch on and in it’s dock, some say that’s bad for the battery, I say I don’t care. It’ll be non handheld if the battery doesn’t work anymore.

This is the dongle I bought, I was using my computer. Made in the USA, and shipped from the USA. Might cost more then the Chinese dongles. But worth the money. Got another jig with it too.

I don’t care if TX stole code, do you know what SX OS is for? Who did they steal their “fake” EmuNAND from?

What happens if I restore my clean NAND backup? It probably deletes the EmuNAND. When do they plan on adding EmuNAND backup?

You don’t update using the built in method, that requires the Switch needing internet access, I blocked it on the router’s firewall. Use ChoiDujourNX. You can download the firmware files, xbins or the forum with free games.

Finally got the process latency under 1000. Using q35 and reinstalled Windows again.

Currently not isolating the CPUs or using pinning, you can change the scheduler, which makes it better.

Change win10 to the name of your VM.

Also, compiled the kernel with the Fedora config, somebody said the config Fedora uses is better, you can find it here. CONFIG_CRYPTO_DEV_SP_PSP is disabled on that kernel, otherwise no KVM, if using a newer bios on your motherboard.

[/xml] Didn't install the latest AMD driver for my video card, that could be what is making the latency high. It's using the one Windows installs from 2017. Only problem is, some games might not work right with an old driver. Then I guess I'll have to buy a NVIDIA card, and hope it works better.

MSI is enabled for everything too. The latency was lower before doing that then before though. Still under 1000, without MSI on everything. Only played Fortnite, seemed smoother, don’t use the auto settings though.

DDU doesn’t work, because Windows reinstalls the driver. Even if you disable the auto driver install.

Installing the latest driver doesn’t really work, you’ll get a black screen. The settings program for it, doesn’t work, probably because it didn’t install the new version.

Battlefield 1 runs better, mostly just one icon, the ping. A 92ms ping is apparently high. Some other icon popped up a couple of times, don’t know what it means. Isolating the CPUs might reduce the latency more.

Don’t need a FreeSync monitor now. That means I can buy Linux a bigger NVMe SSD.

Update Kernel 4.18.10 has the SEV patch, so you shouldn’t need CONFIG_CRYPTO_DEV_SP_PSP disabled. Compiling it now, with that enabled. It can be found here. And it works with that enabled, just like 4.19 with the patch applied.

It’ll say something like “sev command 0x4 timed out, disabling PSP” in dmesg.